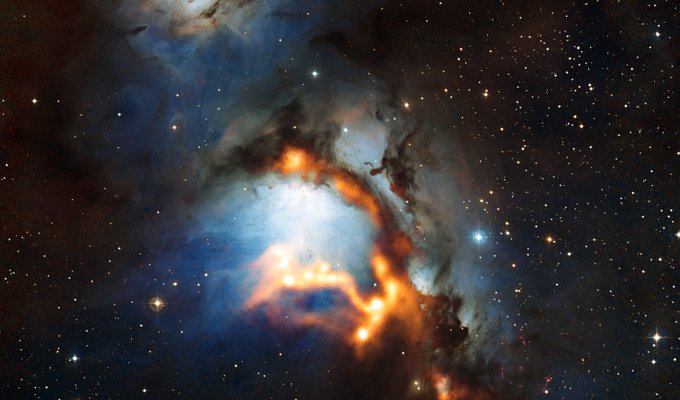 "Mirror, mirror on the wall, who's the fairest of them all?" asked the bright star as it watched its light reflect off grains of space dust. What a surprise the star got when it heard the answer: "These dust clouds!"

Okay, so stars can’t really talk, but these clouds of dust are more beautiful than the stars that are lighting them up. They are called reflection nebulae because they reflect the light from nearby stars, and ‘nebulae’ is the Latin word for ‘clouds’.

The reflected starlight is shown in blue and white in the photo. The dust also generates some light of its own, which is shown in the photo in orange. These orange areas show where the dust has clumped together.

Our eyes can’t see the low-energy light from the dust, but a special telescope called APEX can observe it. Without APEX, instead of being able to see these clumps of dust, astronomers would see nothing at all – just black emptiness that would block the view of whatever lies behind.

But it’s important for astronomers to be able to see these regions, as new stars are born in these clouds of dust and gas.

The APEX telescope is in a desert in South America that is 5100 metres above sea level!

A Star Turned Inside Out!