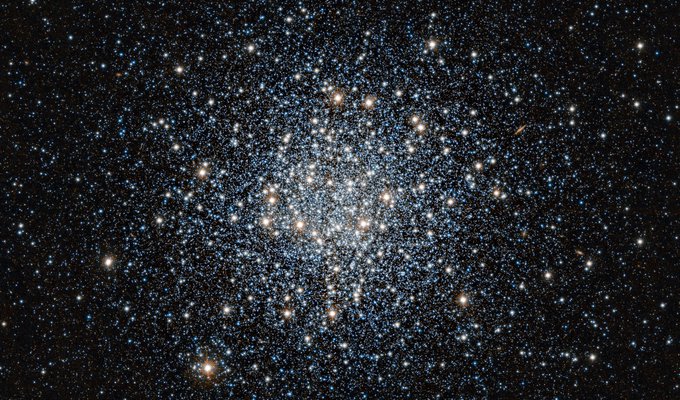 It’s funny how some things in space look like things that we see on Earth. For example, take a look at this new space photo, which shows tens of thousands of stars. The way that the stars are crowded together makes them look like a swarm of fireflies in a meadow!

This group of stars is called a globular cluster. The stars stay close together because of gravity. All of the stars in the globular cluster were born at about the same time, from the same cloud of gas. This means that these stars are brothers and sisters!

These stars are much older than our nearest star, the Sun. While our Sun is only about 5 billion years old, the stars in this cluster are more than 10 billion years old. In fact, globular clusters are among the oldest inhabitants of our Universe!

The Universe was a very different place when these old stars formed compared to when our Sun was born. There were much fewer ingredients available to make these stars – mostly just hydrogen gas. But the Sun was formed in a cloud of hydrogen gas that was sprinkled with a variety of different chemical ingredients, such as oxygen, iron and gold.

These extra ingredients were made inside stars that died and during the explosions that mark the end of some stars’ lives. After the stars died, these ingredients were released into space. But the stars in globular clusters formed when the Universe was very young, so there hadn’t been time to spice up the cosmic gas in this way!

There are about 100,000 stars in this globular cluster, packed within a ball that is only 25 times wider than the distance between the Sun and its nearest star!