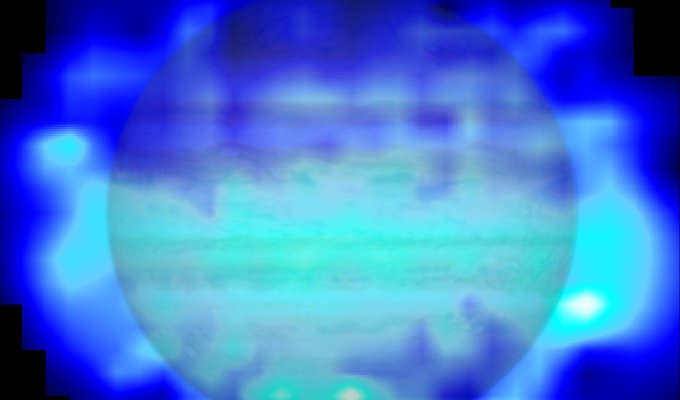 Jupiter is a gas giant and the largest planet in our Solar System, containing 70% of the mass of all the other planets combined. When scientists named Jupiter a gas giant, they weren't exaggerating — if you parachuted into Jupiter, you would never hit solid ground.

For tens of thousands of kilometres you would fall through the planet's thick, stormy atmosphere, before encountering what is probably the planet's strangest feature: a 40,000 km deep ocean of exotic fluid!

But this strange soup, mostly composed of hydrogen, isn't the only “ocean” on Jupiter. This picture shows a map astronomers have made of water in the planet's atmosphere! And they've just discovered that almost all of it was delivered by an outside source — the comet Shoemaker-Levy 9, which crashed into the planet in 1994. And the impact was spectacular!

As the icy comet plummeted into Jupiter's thick, gassy atmosphere, it created an enormous dark spot, 6,000 km across, that can be seen clearly marring the planet's surface in image 2. This wasn't the only thing Shoemaker-Levy 9 left behind; most comets contain a large amount of ice at their cores, and this one was no different.

Using the space telescope Herschel, astronomers have created a new 3-dimensional map of the water on Jupiter — the blue cloud surrounding the planet in this picture is water.

The existence of water on Jupiter isn't a big surprise, but the map shows that most of the water is located in the planet's southern hemisphere. This caught astronomers' interest because if the water had come from the inner planet they would expect the water to be evenly spread across the planet.

The strange concentration of water to the south leaves just one conclusion: the water was a delivery from Shoemaker-levy 9!

There is probably a solid core around 10 times more massive than Earth lurking at the centre of Jupiter, but the intense pressure and heat would stop you from getting close to it. Conditions at the core of Jupiter are ferocious, with temperatures higher than the surface of the Sun and a pressure reaching about 40 million times the atmospheric pressure on Earth! 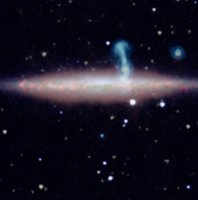 Special Offer: Two Galaxies for the Price of One

Sailing in the Solar Wind