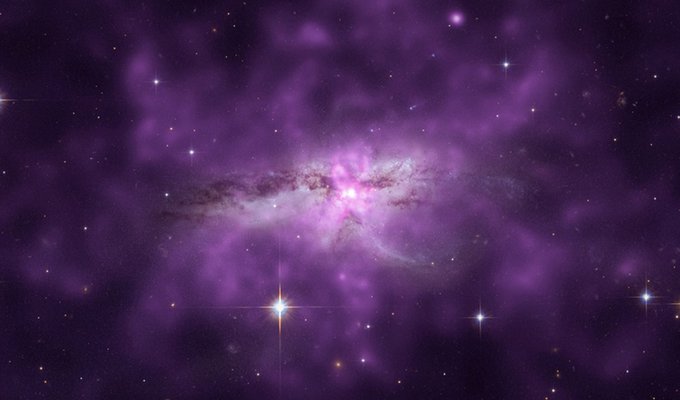 The Universe is enormous and full of empty space. Light from the nearest star outside our solar system has to travel through empty black space for 4.2 years before it reaches our eyes, even though light moves faster than anything else in the Universe and we live in a very densely populated region of space! Yet somehow, despite all this empty space, galaxies crashing into each other is a fairly common sight. One such collision has been caught in this cosmic picture, which shows the enormous cloud of hot gas surrounding two large colliding galaxies called NGC 6240.

The two large spiral galaxies seen in this picture are similar in size and shape to our home galaxy, the Milky Way. Both galaxies are believed to be harbouring supermassive black holes at their centres, which are spiralling towards each other as we speak. It's likely that they will eventually merge together to form an even bigger black hole!

Another consequence of this pile up is the birth of millions of new stars in a ‘stellar baby boom’ that has lasted over 200 million years! This was caused by the violent collision, which stirred up the gases in each galaxy. The baby boom resulted in the birth of many stars much more massive than the Sun. These then ended their lives in powerful supernova explosions, pumping material into the enormous gas cloud surrounding the galaxy, called a 'halo' of hot gas. And it contains enough material to make 10 billion Suns!

So, what does the future hold for NGC 6240? In all probability, the two spiral galaxies will one day form an enormous elliptical galaxy. This type of galaxy appears as a round, shapeless blob with no apparent structures, such as the awesome spiral arms of our galaxy.