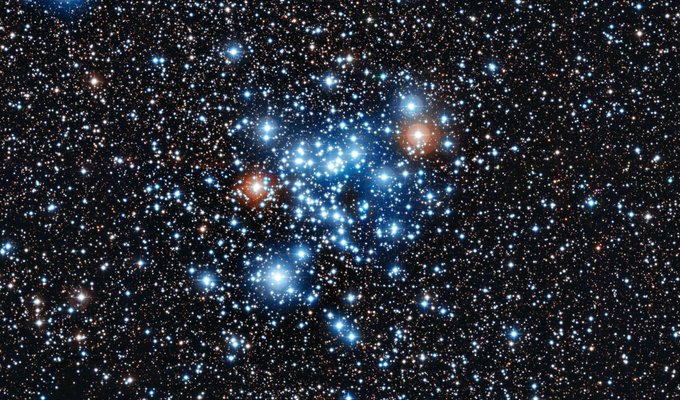 This picture contains thousands of stars that, from a distance, all look the same: like pretty little points of light. But on closer inspection they span many different colours, sizes and temperatures: from cool red dwarf stars to blisteringly hot blue supergiants! And while many spent most of their lives calmly burning hydrogen in their centres and shining with constant, unwavering light, others are far more active. The brand new class of stars that has just been discovered fits into the second category!

The new stars are a type of “pulsating variable” star, named this way because their brightness changes as they continuously swell and shrink like a beating heart. The brightness changes of these stars can range from very large to very small; can last a fraction of a second to years, depending on the type of variable star. Pulsating variables swell and shrink because of the special conditions and strong forces at work inside these stars. So, by watching these pulsations, we can learn the secrets of what is happening inside a star—information that would be almost impossible to get any other way.

Over seven years a team of astronomers studied about 2000 blue and red stars from the cluster at the centre of this picture. They found that 36 of the stars followed a very odd and unexpected pattern—they showed tiny, but regular, changes in their brightness. A “heartbeat” that regularly pulsed every two to twenty hours. This was completely unexpected and for now, nobody can explain why these particular stars vary in this way. We have just one clue: these stars are rotating very fast compared with other, similar stars. Hopefully specialists will soon be able to understand the reason behind these mysterious stellar heartbeats!

Did you know that our very own Sun is a type of variable star? The energy sent out by the Sun varies over an 11-year cycle. And these tiny changes can affect Earth in a big way. For example, between 1645 and 1715, the Sun went through a low-energy period. At the same time Europe was hit by an extraordinary cold spell: the Thames River in London froze, glaciers spread in the Alps, and ice in the Northern Sea increased!