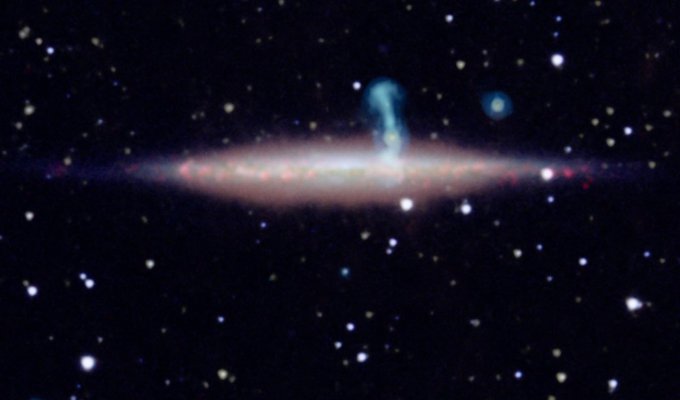 The Universe makes sure we never get bored by providing a constant stream of mysteries and surprises. Last week the surprise for astronomers was that a single galaxy, which has been observed many times, turned out to be two separate galaxies! The pair seen in this picture are lined-up almost perfectly on the sky, which had fooled astronomers for years.

The closer galaxy, seen in pink, is called UGC 10288. It is a spiral galaxy, but from our viewpoint on Earth we are seeing it edge-on, which is why it looks very thin. The farther galaxy (seen in blue) is nearly 7 billion light-years away. Two giant jets shoot away from the top and bottom of this galaxy, one of which is seen in this photograph.

The new observations have turned out to be very lucky for astronomers. They've pulled the curtain back, revealing the disguised duo and providing scientists with an opportunity to learn new facts about the nearer galaxy. Using light from the background galaxy, which travels through the nearer one and into our telescopes, we can measure the features of the nearer galaxy more accurately.

One thing revealed by the improved images of UGC 10288 is that stars are not forming in it as quickly as we first thought. This is because many of the previous measurements of the galaxy included light from the background galaxy, too.

The jet you can see rising from the galaxy in this picture is gigantic. Just ten of them lined up would stretch the entire length of our Galaxy!

Cosmic Candles Shine a Light on the Size of the Universe