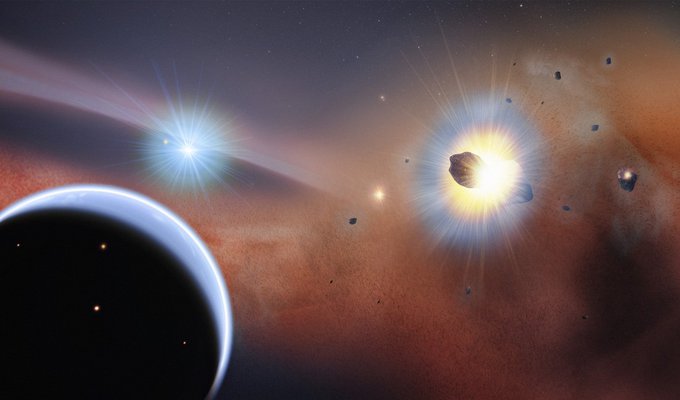 From the comfort of our day-to-day lives, it often feels like space is very far away. But when you think about it, Earth is part of space. 0ur planet is spinning through space with all the other planets, stars and even galaxies. It is even made from the same basic materials or “matter” as everything else, which is why we find the same materials in space as at home.

Astronomers have just spotted large amounts of one of these materials, called carbon monoxide, around a nearby star called Beta Pictoris. Carbon monoxide is a chemical we see on Earth and is created when certain things burn, like forest fires and volcanoes.

Beta Pictoris is surrounded by a large disc of cosmic gas and dust which has a planet inside it. It's from this dusty disc that the star's planet formed.

New observations show that the disc contains lots of carbon monoxide gas. Why is this interesting? Well, this gas is easily and quickly destroyed by starlight. So where did it come from and hasn’t it been burned away?

Astronomers believe that the carbon monoxide is being constantly delivered by comets, asteroids and small planets within the dusty disc. All of these must contain large amounts frozen carbon monoxide which is dropped into the disc when these objects crash into each other and shatter apart.

Like water, carbon monoxide can exist in different forms. Inside the comets and asteroids it is frozen solid, like water that turns into ice when it's very cold outside. In the disc the carbon monoxide is a gas, similar to steam we see rising from hot drinks.

To supply the gas that we see around Beta Pictoris, one big comet must be completely destroyed every five minutes!

It’s lucky for us this cloud of carbon monoxide was found so far from Earth, as too much of this chemical is poisonous to humans and animals!

The Sextans B galaxy is a feast to the eyes

A Journey to the Edge of the Universe