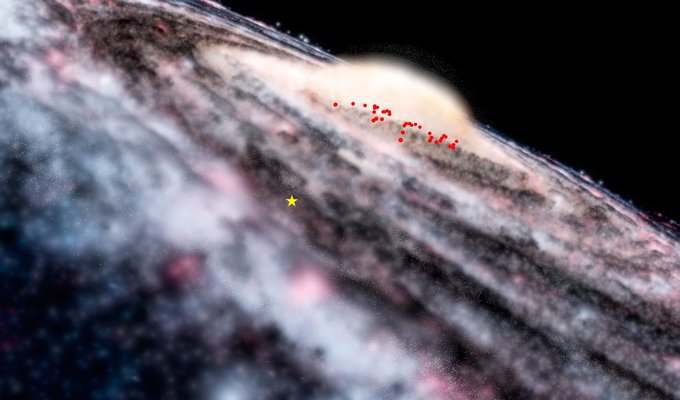 If you stand in a very dark spot on a moonless night, you might see a faint fuzzy glow stretching across the sky, with a glowing milky-white bulge. This is our Galaxy, the Milky Way. The ancient Greeks called this “galaxias kyklos” meaning “milky circle.” This is where we get the term “galaxy” and also the name of our galaxy, the “Milky Way.” But what is the glowing bulge at its centre?

For a long time it was thought to be a fuzzy cosmic cloud, but one day a man named Galileo Galilei pointed his newly built telescope at it. He was astonished to see that it is actually made up of millions of stars! They are squashed so tightly together that our naked eyes can’t see them as individuals; instead they blend together to create a glowing sphere.

This bulge is the busy heart of our galaxy. But even today, with telescopes much more advanced than Galileo’s, we struggle to see exactly what lies inside the bulge. This is mostly because of cosmic dust, which blocks starlight before it reaches our telescopes.

However, there is a type of light that can travel through cosmic dust, this light is called infrared. Using special telescopes that detect infrared light, astronomers are able to peer through the curtains of cosmic dust to reveal what lies beneath.By doing this, they are currently discovering huge numbers of new objects, including star clusters and exploding stars!

The most recent discovery is a new and unexpectedly young group of stars right in the middle of the galaxy. The red dots on this picture show their location. The gold star shows where we are!

Previously astronomers thought the centre of the Milky Way only contained old stars. But this proves that brand new stars have been forming there recently. It turns out the heart of our galaxy is much younger than we thought!

Our Solar System is located halfway between the centre of the Galaxy and the outer edge. It takes 26,000 years for light from the central bulge to reach us on Earth!