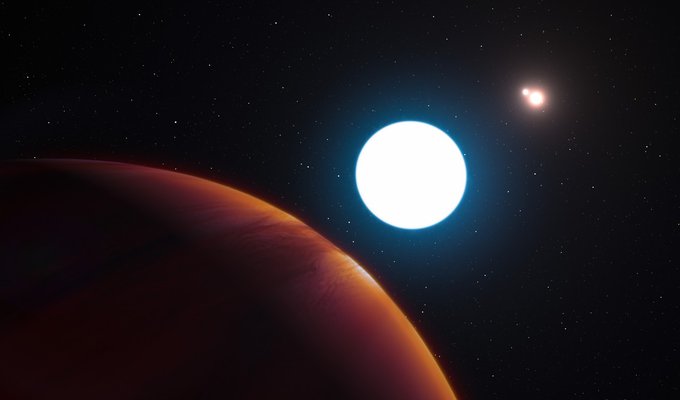 Imagine a world where each season lasts over 100 years and you have three shadows at once.

Now meet HD 131399ab, a newly discovered exo-planet with these exact quirks! (An exo-planet is a planet orbiting a distant star.)

The strange new world was discovered orbiting a star in a triple star system. That means its parent star orbits alongside two other stars. This makes sunrises and sunsets something special — sometimes one sun rises in the sky, sometimes it’s two or three!

But despite this, this planet is not entirely unique. Many planets orbit stars that come in pairs or even triples. What is special about this new world is that astronomers spotted it directly. Others planets have been detected orbiting around double and triple stars, but these were all discovered using clever tricks, like carefully watching to see if stars wobble.

More than 3,000 planets have been found orbiting distant stars, but less than 50 have been directly photographed. Spotting a tiny planet travelling around a distant star is like trying to find a mosquito flying in front of the midday sun.

For planets to survive in a triple star system, a delicate balance must be struck. This planet’s current orbit is roughly twice as large as Pluto’s around our Sun, swinging it into a very unstable region of the system, just a bit too close to the spinning pair of stars.

Because of this, the planet could be doomed to one of several wretched fates, including burning up as it hurtles towards one of the stars or being ejecting into deep space, destined to wander for eternity in the never-ending darkness.

HD 131399ab is four times as massive as Jupiter and takes 550 Earth-years to complete one orbit around its star.

A Study in Supernovae