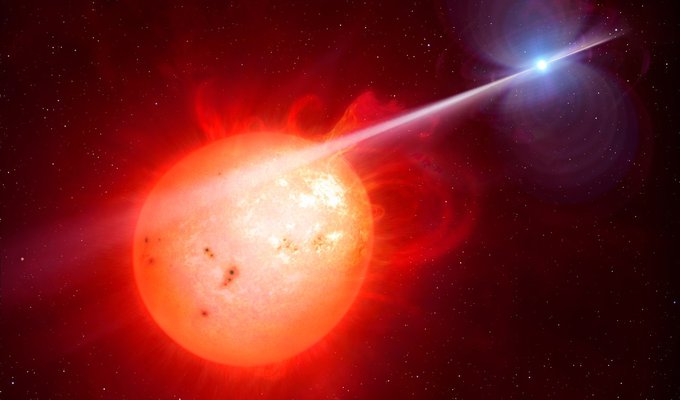 Starkiller Base is the headquarters of the First Order in Star Wars: The Force Awakens. The base is not only twice the size of the Death Star, it's also much more powerful. We see this in the movie when it demolishes five planets at once!

All that power has to come from somewhere, but where could Starkiller Base get that amount of energy? From the biggest nuclear reactors in the galaxy — stars.

The base is called “Starkiller” because it literally drains the power from stars to charge its cannon. The energy is then released as a deadly blast of radiation.

Thankfully neither the First Order nor Starkiller Base are real, but astronomers have just spotted a real ray gun that is equally powerful.

Despite travelling the Universe together, the relationship between the two stars is anything but friendly.

Just like Starkiller Base, the white dwarf accelerates particles up to almost the speed of light (the fastest speed possible in our Universe) and aims them at its companion star in a deadly beam. The explosions lash out so brutally that the entire star system appears to glows brightly for a short period.

This pulsing led astronomers to mistake the system for a variable star for a long time. (A variable star brightens and dims over time.)

While we’ve known that neutron stars can pulse for almost fifty years, this is the first time a white dwarf has shown similar behaviour!

The system can brighten by a factor of four in just 30 seconds!

This Space Scoop is based on Press Releases from ESO , Hubble Space Telescope .

Jigsaw Challenge: Piecing Together a Map of Saturn’s Largest Moon