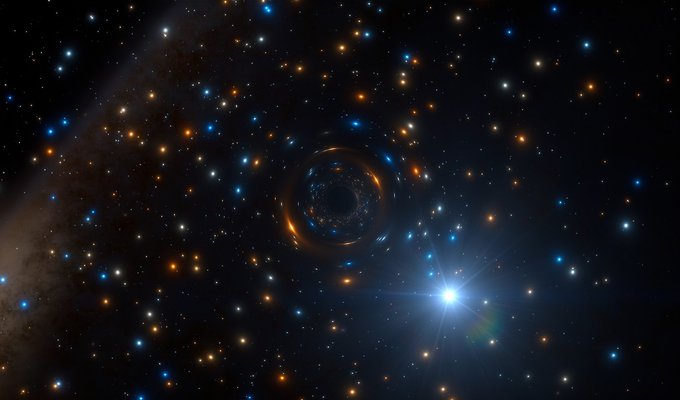 Scientists have spotted a new contender for Dancing with the Stars in an unlikely place – deep space!

Deep inside a cluster of thousands of stars, one stands out from the rest. It caught the eye of astronomers who spotted it flying backwards and forwards through space in an intricate pattern. While ballroom dancers rely on a partner, the star was floating through its graceful steps alone – or so it seemed.

It turns out that the star does have a partner, but it’s invisible. Hidden among the many stars in this cluster lurks a black hole.

Black holes don’t give off any light, making them impossible to spot directly. However, we can see the effect they have on the Universe around them. The star’s dance shows us its path around the black hole.

Although they are difficult to find, black holes are fairly common in some parts of the Universe – but not in globular clusters. This is the first time a black hole this size has been seen dancing with a star in a globular cluster.

Globular star clusters are huge balls made up of many tens of thousands of stars. They swarm around our Milky Way galaxy and are among the oldest groups of stars in the Universe. Their impressive size and age means globular clusters should produce lots of black holes similar in size to this one (which is about four times the mass of our Sun).

However, black holes have proven so rare in globular clusters that until recently scientists assumed they must get kicked out shortly after they form. This discovery suggests that’s not the case which is lucky for this star, as it would have lost its dancing partner.