Spiral galaxies might be much older than we think
June 2, 2021 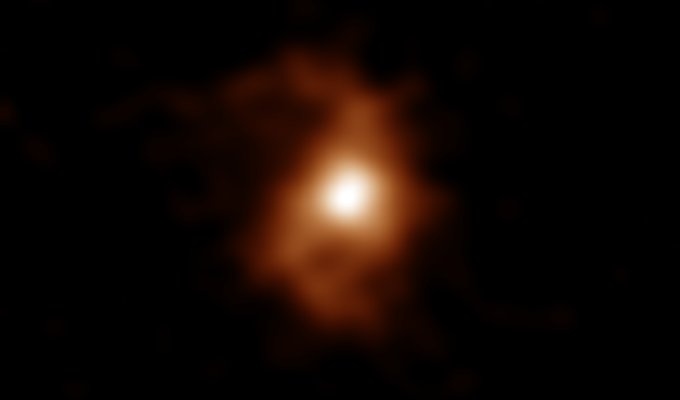 Our home galaxy, the Milky Way, is beautiful. Its “arms” show that it is also one of the spiral type.

Spiral galaxies like ours account for as much as 70% of the galaxies in the Universe. But the more we look back into the history of the Cosmos (and closer to the Big Bang) the less spiral galaxies we see.

So astronomers have a question: how and when did the first spiral galaxies form?

In a recent paper in the Science journal, a team of astronomers using data from the ALMA Observatory spotted a galaxy, called BRI 1335-0417, just 1.4 billion years away from the Big Bang. As the Universe is almost 14 billion years old, this is a really old galaxy, formed when the Universe was really young!

BRI 1335-0417 contains a large amount of dust — making it hard to see starlight and study the galaxy in detail using visible light. As ALMA can detect radio emissions, it is possible to understand what goes on in there.

The size of one of the spiral arms of the galaxy is about a third of the size of our own galaxy.

Researchers say that the  total mass of stars and interstellar matter in BRI 1335-0417 is about the same as that of our Milky Way. “For a galaxy that existed in the early Universe, BRI 1335-0417 was a giant,” says Takafumi Tsukui, a student at the Graduate University for Advanced Studies (SOKENDAI) in Japan, who led the study.

Astronomers now want to know how a spiral galaxy could be born at such an early stage of the Universe. Was it a merge of smaller galaxies? And how about its future? Will BRI 1335-0417 turn from a spiral into an elliptical galaxy in the future?

These answers will play an important role in the study of galaxy evolution over the long history of the Universe — and could even give us more clues about how our Solar System was born!

BRI 1335-0417 is still forming stars because the gravity in the gas at its outer parts is quite unstable. Because of that, astronomers believe the galaxy could have been formed as a result of a merge between two smaller galaxies. When this happens lots of gas and dust come from the outside to the inside of galaxies.

Asteroid Day: Look Out for Rocks Falling From the Sky!