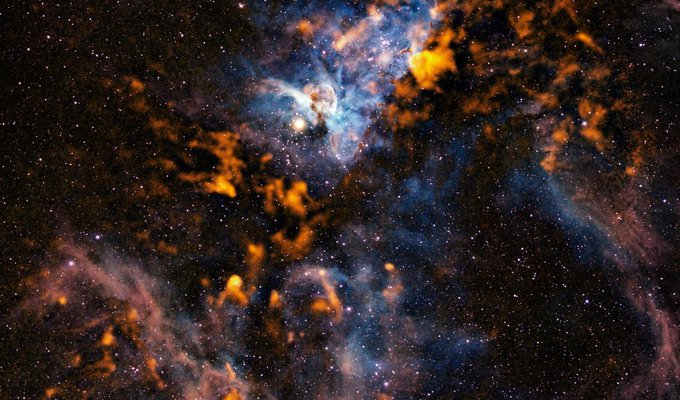 Dust is just some dirty stuff that has no real purpose, right? Actually, in space, dust is a crucial ingredient for making stars!

Astronomers often talk about stars being huge balls of gas, but they contain a lot of dust too. Take a look at this striking new picture of a region in space in which new stars are being born, called the Carina Nebula. The orange stuff makes up a big part of the picture – and that’s just dust!

Unlike the gas particles, the dust isn’t used as fuel to power the stars, but without it they would never be born. That’s because stars can only form when the material in the star-forming region is dense enough. This is where the dust grains help out – adding some extra bulk.

There are few areas in the Carina Nebula that are dense enough to form new stars within the next million years. However, massive stars that are found in the Nebula can help to push more gas and dust particles together.

The combined weight of the gas and dust in the Carina Nebula is about 140,000 times that of our Sun!