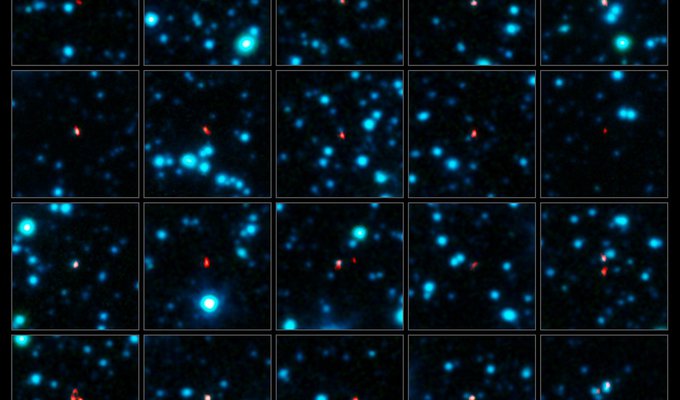 The biggest bursts of star birth in the early Universe took place in galaxies that contained lots and lots of cosmic dust. But the dust that makes these galaxies so fertile obscures them from view, making them very difficult to spot with normal telescopes. For over 10 years, astronomers have been trying to get a close look at these young galaxies, which are all undergoing a massive stellar baby boom. Now, after just four weeks in action, the special ALMA telescope has managed to find over 100 of them. That's more than all other telescopes have found combined! You can see a selection of these galaxies in these photographs.

To pick these distant galaxies out from their murky surroundings, astronomers have to use telescopes that observe a special type of light that can penetrate the thick fog, the ALMA telescope is one of them.

One of the characteristics of light is that it behaves like a wave. Different types of light have waves of different sizes. The length of the wave is called the ‘wavelength’. This is measured from the tip (crest) of one wave to the tip of the next (see image 2). Radio waves, visible light (the light our eyes can see) and microwaves are the different types of light waves. ALMA looks at the Universe in radio waves, which have a wavelength of about one millimetre. These can penetrate the thick fog obscuring these fertile galaxies.

It was previously believed that some of these galaxies were forming stars a thousand times more energetic than our own galaxy, the Milky Way. This would put them at a high risk of blowing themselves apart! However, the new images from ALMA have revealed that these seemingly suicidal galaxies are actually just lots of smaller galaxies that are forming stars at much safer rates.

Radio waves are the longest type of light waves. Their wavelengths range from shorter than a centimetre to longer than a football field!