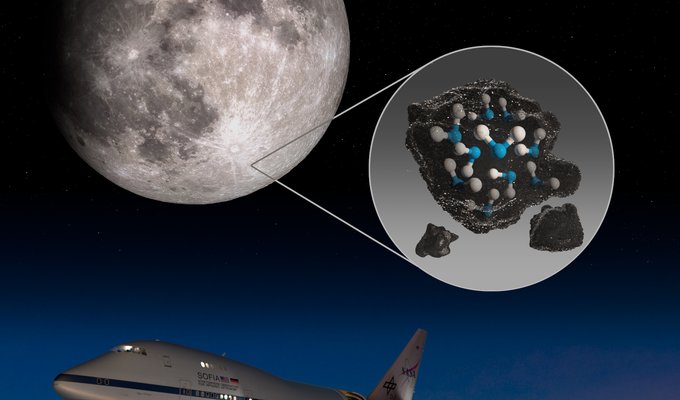 When astronauts first went to the moon over 50 years ago, they believed it to be completely dry, with no water in sight. But over the last twenty years, research on the moon has found water and ice. These discoveries so far have been on the cold, dark and shadowy parts of the moon - mainly at its poles and in the form of ice.

Now, for the first time, NASA has announced that the SOFIA telescope has found that water also exists on the moon’s surface where the sun shines. There is also new evidence that there is more water than we previously believed to be on the moon.

SOFIA detected water molecules in the Clavius Crater, one of the largest craters visible from Earth, which is located in the Moon’s southern hemisphere.

The Stratospheric Observatory for Infrared Astronomy (otherwise known as SOFIA) is a joint project of NASA and the German Aerospace Center.

This is a special telescope that operates from inside of a large plane. On the outside, it looks much like a plane that you or I would take to go on a vacation. But, at night, the plane has a large door on its side that opens up to allow the telescope to observe the sky.

SOFIA has been studying the cosmos since 2010 and has been investigating things like comets, areas where stars are forming, the center of our Milky Way galaxy, and more.

This discovery is important for the future of space exploration because it means there is more water on the moon than we previously believed. Water can be used to support humans living on the moon and as a type of fuel for spacecraft, rockets, and habitats. This means that it can support our plans to live on the moon and to explore beyond it in the future!

Scientists now want to investigate how much water is on the moon, and where it is located. SOFIA will now continue to study the moon to look for water in other sunny locations to learn more about how the water got there.

This Space Scoop is based on a Press Release from NASA.

Although the Moon shines bright in the night sky, it doesn’t produce its own light. We see the Moon because it reflects light from the Sun.