Space is a colourful place! Take, for example, this beautiful new photo of a bright star cluster surrounded by blue and red clouds of gas (click on it to see it in full).

The way that the colours are neatly separated makes it look like a competition between the reds and the blues. In the red corner, there’s the gas that our Sun is mostly made of: hydrogen gas! And in the blue corner, we have the mighty Os that we need to breathe: oxygen gas!

Why are these gases separated into two teams? It all comes down to how much the gas is heated by stars – but not by those in the star cluster shown here. There’s another star cluster beyond the top-right corner of the picture, which contains hotter and younger stars.

The hot, young stars of this other star cluster are powerful enough to make the oxygen gas that is close to them (in the upper part of the picture) glow. But further away from this cluster, the stars can’t heat the oxygen gas enough to make it shine. Only hydrogen can glow at the bottom of the picture, as it takes less energy to make it shine than it does for oxygen.

So the gases aren’t really separated into two teams. The hydrogen and oxygen gases are actually mixed up, but which gas we see shining brightly depends on how close it is to the hottest star players.

About two thirds of the human body is made of oxygen! 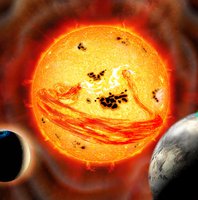