Some places on Earth are extreme: the North and South Poles with their freezing temperatures, the deep sea where sunlight cannot reach, and the inside of fiery hot volcanoes. But none of these regions come close to comparing to the harsh conditions found on some other planets in the Universe.

For example, using an X-ray space telescope called Chandra, astronomers have recently found a distant planet that is being blasted with X-ray radiation from the star that it orbits. This X-ray radiation is 100,000 times more intense than what the Earth gets from its nearest star, the Sun!

Since this planet is found outside our Solar System, it is called an ‘extra-Solar planet’, or ‘exo-planet’ for short. This exo-planet is massive – about 3 times heavier than Jupiter, or 1000 times that of Earth. It is also much closer to its star than the Earth is to the Sun, putting it directly in the firing line of those intense X-rays.

To find out more about this exo-planet, astronomers combined observations made with Chandra with those made with another telescope that is based on the ground, called the Very Large Telescope. In doing so, astronomers have discovered that the X-ray radiation is destroying about 5 million tonnes of matter from the planet every second!  Astronomer Sebastian Schroeter says: “This planet is being absolutely fried by its star.”

Life forms, such as bacteria, which can survive in extreme environments on Earth are called extremophiles (you say it like "extreme-o-philes"). Could we find alien extremophiles living in even harsher environments in the Universe?

There's Something Fishy about This Picture 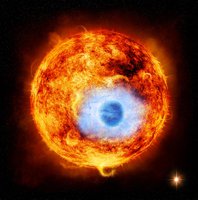