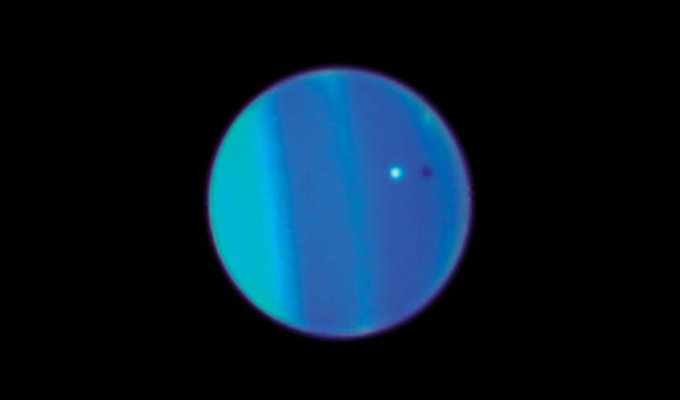 The planet Uranus is an oddball. Unlike all of the other planets in our Solar System, it spins on its side! This means that if you were on Uranus you wouldn’t see daytime and nighttime in a day like you see on Earth, as its spin doesn’t affect which parts of the planet see the Sun.

Astronomers had thought that Uranus was knocked onto its side during the Solar System’s early history when an object a few times more massive than the Earth hit it. However, a team of astronomers announced today that this story of events isn’t quite right.

The astronomers created a computer program that simulates how Uranus would look today if one massive object had knocked it over in the past. The computer simulation showed that, if this had happened, the planet’s two moons would be orbiting in a different direction to what we see today. However, by changing the computer program to show what would have happened if Uranus had been bumped by at least two smaller objects, the simulation showed the planet and its moons spinning and orbiting like we see them today.

This discovery means that the theory astronomers came up with for how the planets Uranus, Jupiter Saturn and Neptune – the so-called ‘Gas Giants’ – were formed is wrong. Astronomer Alessandro Morbidelli explains: “The fact that Uranus was hit at least twice suggests that significant impacts were typical in the formation of giant planets. So, the standard theory has to be revised.”

The team announced the findings of their computer simulation today at an astronomy meeting held in France, where about 1,400 astronomers from around the world have gathered to share their latest research about planets. Check out our other news stories from the meeting at the bottom of this page.

A year on Uranus is much longer than a year on Earth, as it takes the planet about 84 Earth years to travel around the Sun! 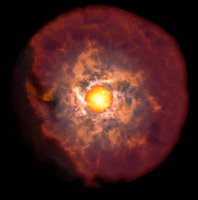 Clearing the Fog Around Exploding Stars