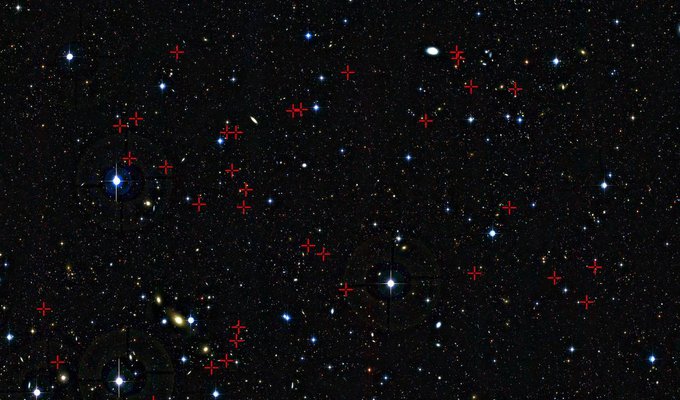 Astronomers have known for a while that galaxies were much smaller when the Universe was younger. Over the lifetime of the Universe, galaxies have put on a lot of weight, but their food and eating habits were mysterious.

Now, a team of astronomers has used a powerful telescope called the Very Large Telescope to spy on galaxies at dinnertime. The photo above shows some of the galaxies that the astronomers observed marked with red crosses.

The Very Large Telescope is a powerful telescope and it can look back in time to when the galaxies were teenagers. Looking back in time sounds like something from science fiction, but it’s actually quite simple: It takes billions of years for the light from these very far-away galaxies to reach Earth, so we actually see what they looked like billions of years ago! (For more information about this, click here.)

From their observations, the astronomers discovered that galaxies in their early teens like to repeatedly snack on gas. But galaxies in their late teens want a much bigger meal and gobble-up smaller galaxies. Basically, galaxies get greedy as they get older and turn into cannibals!

The galaxies observed here, with their monstrous appetites, are actually found in the night sky in the constellation called “Cetus”, which means “Sky Monster”!