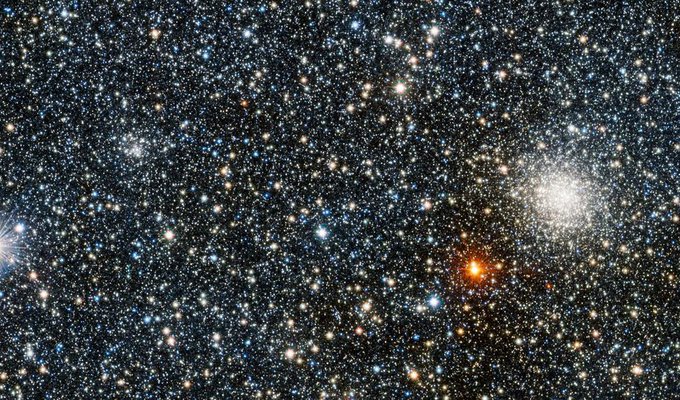 Our Galaxy, the Milky Way, is shaped like a whirlpool: It has bands of stars that spiral around the centre, which astronomers call the Galaxy’s ‘arms’. (To see what our Galaxy looks like, click here.) We live in the outer parts of the Milky Way, in one of its spiral arms. This is a quiet part of our Galaxy, where the closest stars to our Sun live far away.

The small centre of the Milky Way is a much more crowded place, as this is where most of its stars are found. This new photo, which was taken by a telescope called VISTA, shows a small part of this busy centre. It is so crowded here that if we moved to this part of our Galaxy, the night sky would be spectacular: stars in the night sky so close that it would be bright enough to read a book without switching on a lamp!

Obviously, it’s impossible for us to pack-up our belongings and relocate to the Milky Way’s centre. But with powerful telescopes like VISTA, astronomers can still observe its beauty from a distance.

The Milky Way doesn’t just look like a whirlpool – it rotates like one too! It takes about 200 million years for our Galaxy to complete one rotation.

Fireworks in the Universe with a record and a twist