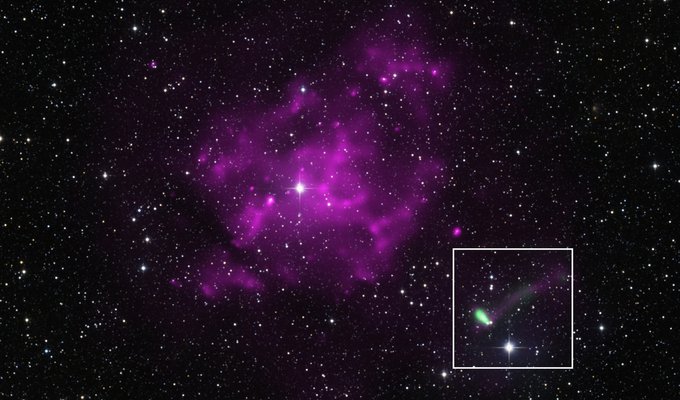 Nothing in space stays still. In fact, most stars are like long-distance marathon runners, as they are constantly moving in space throughout their lifetimes. However, astronomers have spotted a star (shown in this new space photo as a green smudge in the box) that is better at sprint running.

To work out the speed of this star, astronomers had to figure out how far it has travelled since it started its race and how long this took. Astronomers think the star began its race at the centre of the purple cloud of gas and dust in the photo. That’s because this is a special type of star that spins very quickly, which is called a pulsar. And the pulsar was ejected during the explosion that created the cloud of gas and dust.

It’s a pity astronomers can’t enter these two stars into a ‘Space Olympics’ to determine which one is the fastest sprinter. Instead, they need to work it out the hard way and fine-tune their results.

If the pulsar is moving at a speed of 11 million kilometres per hour, it could travel around the Earth’s equator in about 13 seconds!