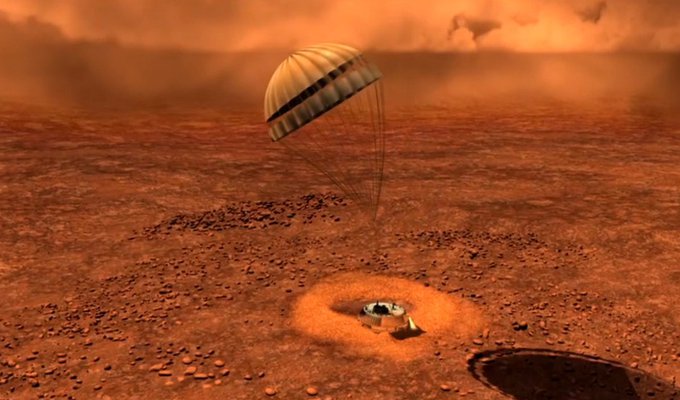 In January 2005, the Huygens probe dove through the foggy skies of Titan, Saturn’s largest moon. It became the first and only probe to land on a world so far from Earth, which isn’t surprising considering it took over 7 years to get there!

Titan is one of the most Earth-like places in the Solar System. Like Earth, Titan has an atmosphere, but this atmosphere is much thicker and  stretches higher into space than ours. This foggy atmosphere covers Titan’s surface in a hazy orange blanket, hiding its secrets from our eyes. Huygens’ mission was to reveal these secrets and it did! It provided hundreds of images of Titan’s alien landscape!

Now, it is almost 8 years since that event, and scientists are still exploring this alien world using Huygens’ information as their eyes. It took 10 nail-biting seconds from first impact until the probe bounced, slid and wobbled to a complete stop. Scientists from the European Space Agency have created a computer simulation to show exactly what the landing would have looked like.

These few moments after impact have just revealed new secrets about Titan’s surface. The way the Huygens probe moved when it landed shows that there’s a thin layer of ice on the surface. Underneath that, the ground is a lot like the wet sand we find on Earth’s beaches!

Titan is the second largest moon in the Solar System, bigger than our moon and even bigger than the planet Mercury.