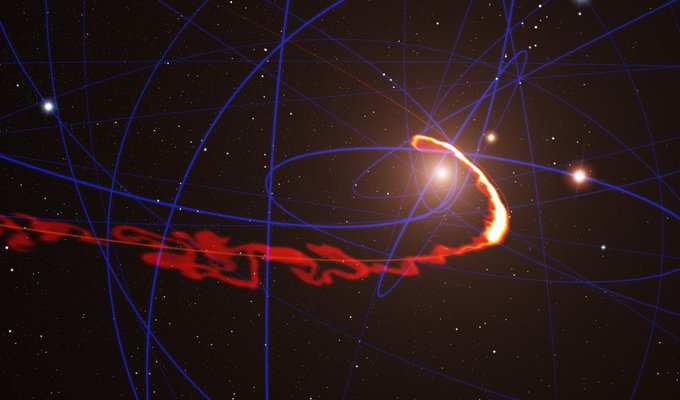 What do you think is old? Your parents? Your grandparents? Well, in astronomical terms, humans never get old. Our Sun has been around for 4.6 billion years, and it's only halfway through its life!

Because of the much longer lifespan of cosmic bodies, it can seem to us that nothing much changes in space. It's not very often that we get to see a star end its life in a fantastic supernova explosion or see an unlucky object stumble too close to a black hole and get sucked inside.

But wait...that's exactly what astronomers are seeing at this moment! And it's not just any black hole that is ‘feeding’, but the supermassive black hole sitting at the centre of our very own Galaxy!

It's believed that almost every galaxy has a supermassive black hole at its heart. Ours is called Sagittarius A*, (pronounced ‘saj-it-AIR-ee-us A-star’). It's been given this strange name because if we were to travel to it from Earth, we'd have to fly towards the constellation ‘Sagittarius’ (which you can see in image 2.)

But don't expect to see Sagittarius A* when you arrive! Black holes are named for their colour, or rather, their lack of colour. Against the dark background of space, black holes are invisible—until they begin feeding.

Luckily enough, a giant gas cloud just floated too close to the Sagittarius A* and for the first time ever, we're get to see it in action!

This picture shows the cloud (in red), which has been stretched so much by the black hole's gravity, that it resembles spaghetti! This is actually called 'Spaghettification' or 'the Noodle Effect'.

The funky blue lines criss-crossing across the picture are an artist's representation of the paths each of the stars in the picture follow around the black hole.

Before astronomers knew that Sagittarius A* existed, they were very confused about the very strange behaviour of stars at the centre of our galaxy. About a dozen stars seemed to be dancing in circles around nothing! We now know that an invisibile black hole was causing this odd behaviour, pulling the stars into orbit around it.