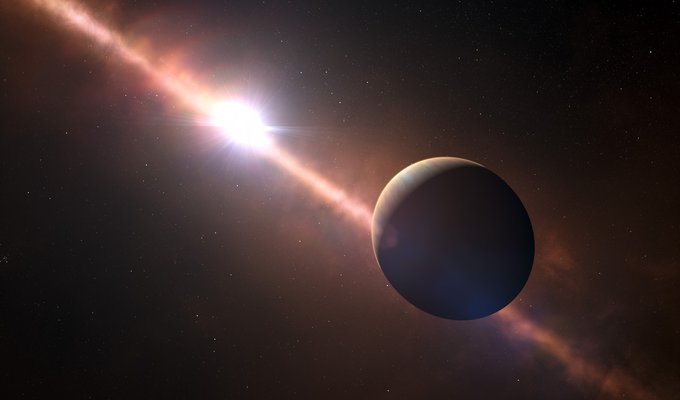 Our Universe is constantly in motion. Not so long ago, Space Scoop explained that right this moment you’re hurtling through space at hundreds of thousands of kilometres per hour! The Earth is moving, our Solar System is moving and even our Galaxy is gliding through space.

But the length of one rotation and one orbit can be different on other planets. For example, one orbit (or ‘year’) on Mercury takes just 87 Earth days. This means Mercury orbits the Sun four times in every Earth year. So, if you were 10 years old on Earth, you’d be 40 years old on Mercury!

The length of day is also different on other planets. For example, one day on Jupiter lasts just 10 Earth hours. Astronomers have now measured the length of a day on a planet outside our Solar System (an exo-planet)!

Beta Pictoris b is a planet orbiting a distant star. The planet is 16 times larger than Earth, yet it has a day that lasts just 8 hours! This means the planet must be spinning through space at almost 100,000 kilometres per hour!

Beta Pictoris B is rotating much quicker than any planet in our Solar System. By comparison, Jupiter rotates at about 47 000 km per hour, while the Earth spins at only 1700 km per hour.