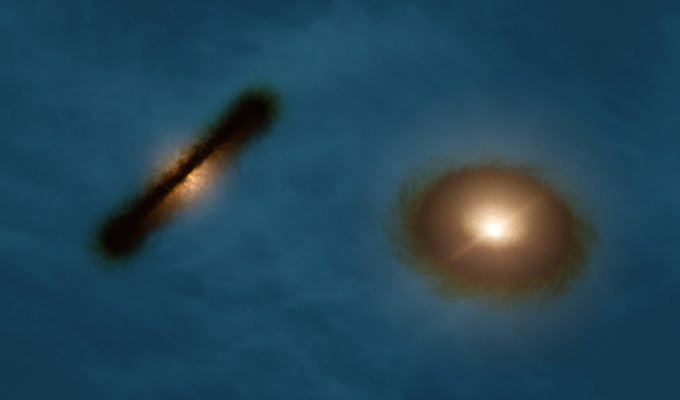 It’s well known that the planets, moons, asteroids and other objects in our Solar System orbit the Sun in a more-or-less perfectly flat, disc-like motion, like a spinning CD. But is this true for other Solar Systems in the Universe?

By 25 July 2014, 1811 planets had been found orbiting distant stars, and the majority of these planets do orbit their stars in roughly disc-shaped orbits. But there are exceptions.

Some planets have been found orbiting their parent stars along strange, tilted paths. And we are now a step closer to understanding these weird and wonky systems.

Unlike our solitary Sun, most stars form in binary pairs — two stars that are in orbit around each other. Using the ALMA telescope, astronomers have recently been observing two wildly crooked planet-forming gas discs round the young stars in a binary system called HK Tauri.

Because the two stars and their discs are not perfectly lined-up, the gravitational pull of one star pulls on the other disc, making it wobble. Any planets forming in one of these discs will also be disturbed by the other star’s gravity, causing its orbit to become tilted.

It looks like each star in the HK Tauri system will eventually have it’s own planet (or maybe multiple planets!) But there are some planets that orbit around two stars. These are called ‘circumbinary planets’ and there have been 17 discovered so far.