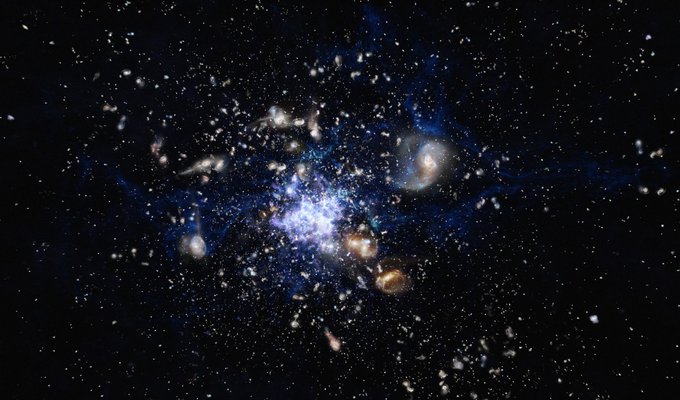 In the very beginning of the Universe, after the Big Bang, gravity began pulling together tiny particles to make stars. Millions and billions of stars were bound by gravity into groups that we call galaxies. And gravity even confines galaxies together in packs that we call ‘galaxy clusters’.

Galaxy clusters are the largest groups in the entire Universe. They contain hundreds or even thousands of gigantic star-filled galaxies along with enormous clouds of blisteringly hot gas (up to 100 million degrees!). Our home galaxy of 300 billion stars looks like a tiny village, compared to these bustling cosmic cities.

(Read 'A Flash From the Past' to find out how astronomers look back in time.)

Like a construction site on Earth, galaxy clusters are dusty while they are forming. This makes it difficult to see exactly what is happening inside them. Luckily, we now have telescopes that can peer through the thick haze.

Using one of these special telescopes astronomers have managed to look at stars being born inside the Spiderweb galaxy cluster for the first time. But a surprise awaited them when they realised where these stars are forming.

As its name suggests, the Spiderweb Galaxy has lots of threadlike arms stretching outwards from its centre. Astronomers expected to find most new stars forming in the middle of this giant galaxy. But they actually found that instead, most of the stars were forming in a small region caught on one of its spindly threads!

To make this discovery, astronomers had to brave 40 hours in a telescope control room that sits on top of a mountain, 5000 metres high! That’s higher than Mont Blanc!