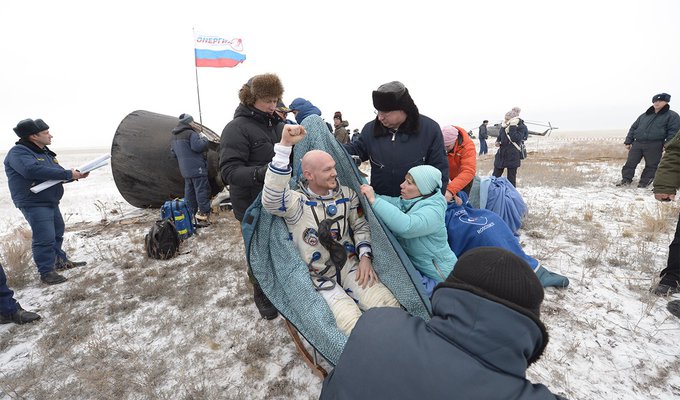 Early this morning, three astronauts strapped into the Soyuz spacecraft, undocked from the International Space Station and plunged back to Earth. Their fiery descent lasted 3-hours before they landed safely on the grassy plains of central Asia, ending their 6-month mission in space.

You might think the hardest part of a mission to space is the launch, but landing offers its own kind of challenge. The spacecraft called Soyuz (pronounced soy-yooz) begins plummeting to Earth at almost 30,000 kilometres per hour. (That’s 100 times quicker than the fastest train!) To return the men home safely, this speed needs to be greatly reduced before they hit the ground.

The return to Earth is like riding a rollercoaster, becoming bumpier as they hit Earth’s atmosphere. At this point, all parts of the spaceship that are no longer necessary are ejected and burn up before reaching the ground.

Fifteen minutes before landing, parachutes will burst open, dramatically reducing the speed to walking pace. Then, just one second before touchdown, six rockets will fire into life for a dramatic but safe landing.

Having landed successfully, their flight is over but their mission still has some way to go. An astronaut’s body adapts to living in space in many ways and they will be suffering from a loss of strength. Some have even had difficulty turning corners and walking straight lines during the weeks after their return.

Learning to live with gravity again takes time and for weeks the men will be watched by doctors as they readapt to life on earth. ESA astronaut Alexander Gerst is now flying straight to the European Astronaut Centre, the home base of all ESA astronauts in Cologne, Germany. ESA’s medical team will monitor how he readapts to gravity after spending more than five months in weightlessness!