From edge-to-edge, Saturn's ring system is hundreds of thousands of kilometres wide, so large that if Earth had Saturn’s rings they would touch the Moon. Now a new planet with rings has been found that makes Saturn's rings look tiny!

The new system includes more than 30 rings surrounding a distant, giant planet, much larger than Saturn or even Jupiter. It's the first of its kind to ever be seen outside our Solar System.

The new ring system is 200 times larger than Saturn’s. If all the small fragments of rock in this ring system were squashed into a ball, it would be roughly the same size as Earth!

If we could replace Saturn's rings with the rings around this distant planet, they would be easily visible at night – maybe even in the day. And they would appear many times bigger than the full moon on our sky!

Despite being so large, these distant rings are much too faint to be seen with even the most powerful telescope on Earth. However, when the planet with these rings passed in front of their star, the rings blocked out the star’s light in a strange way and gave away their secret location. This eclipse blocked out almost all of the star’s light for day on end.

Scientist have also seen signs of moons around the new planet, including one that's larger than Mars! 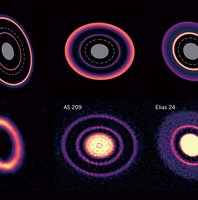