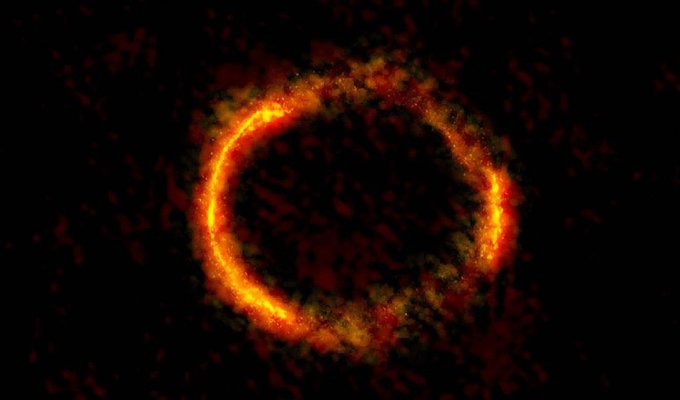 Have you ever looked at yourself in a funhouse mirror? It’s fun! Depending on the shape of the mirror, they can make you look short and round or tall and thin. You can also try looking at yourself in a spoon. It makes your face look really weird.

Every curved mirror creates a warped view and strongly curved lenses (like glasses lenses) can do the same thing. Even in space we find distortions, these are caused by so-called ‘cosmic lenses’.

Last year, using the ALMA telescopes, astronomers made this strange photo of a very distant galaxy. The galaxy isn’t distorted because they used a curved mirror or a special camera lens, but because the distant galaxy was observed through a cosmic lens.

The galaxy in this picture is really far away. Between the distant galaxy and Earth is another galaxy. The gravity of the galaxy closer to Earth warps the image of the more distant galaxy. This is how a cosmic lens works.

The cosmic lensing effect is extremely strong in the picture. The light of the distant galaxy is bent all the way into a ring. The distant galaxy in this image is not ring-shaped at all (just like you’re not really as short and round as a distorting mirror can make you appear).

Astronomers will now try to find out what the galaxy really looks like – without the distorting effect of the gravitational lens.

You might think that cosmic lenses are a nuisance to astronomers because of the distortions they create. But in fact, they’re very helpful, they make distant galaxies looks brighter, so we can study them in much more detail!