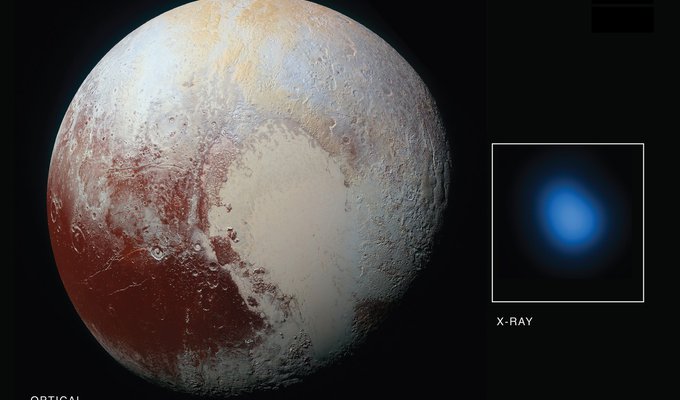 X-rays are a more powerful version of the normal type of light your eyes can see. X-rays can travel through things that ordinary light can't, like wood and plastic, because they have more energy.

This ability can be very useful indeed. For example, X-rays can travel through people's skin and muscles, so doctors can see their bones underneath.

X-rays are also used to study cosmic objects. In hospitals, X-ray pictures show us a silhouette of our bones, but in astronomy, we photograph the object creating the X-rays itself.

The pictures above show Pluto, a dwarf planet at the outer edges of our Solar System. The image on the left shows Pluto in normal light, and the blue blob on the right is the X-ray light from Pluto.

The fact we can see X-rays from Pluto is surprising. Cold, rocky worlds like Pluto have no way of creating these powerful X-rays. Scientists believe that the Sun is responsible.

The Sun doesn’t just give off heat and light, there's also a stream of particles flowing from the Sun. Where these particles meet a planet’s atmosphere, X-rays are created.

But Pluto lies about 6,000 million kilometers from the Sun. At this distance there just aren’t enough particles reaching the dwarf planet to explain why its X-ray light is so bright.

We need deeper and more detailed images of the X-rays coming from Pluto to solve this mystery for sure. But one possible explanation is that a long tail of gas, like those seen on comets, could be trailing behind Pluto.

Pluto lies around 6,000 million kilometres from Earth. It takes light about 5 hours to travel this distance — including that X-ray light that created this picture! 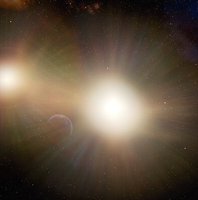 The missing Tatooines out there

Learning From The Stars: Cosmic Recycling