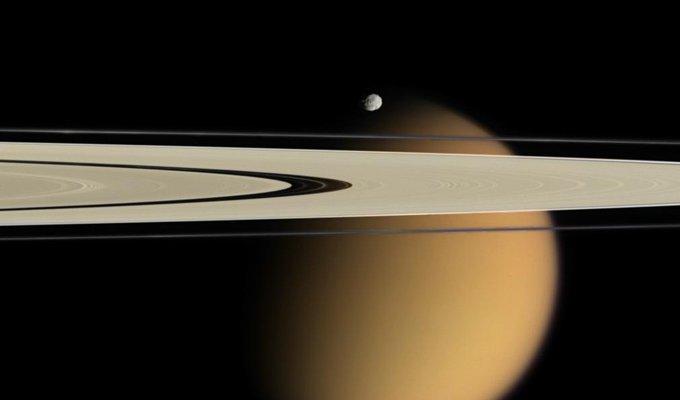 This week, two enormous radio dishes, on opposite sides of the Earth (in Australia and South America), are listening for whispers from Saturn.

Each of the dishes is the size of a large house, allowing them to act like super-sensitive eyes, picking up faint radio signals. They have been called upon to help pick up the final messages from the Cassini spacecraft.

Cassini launched on its epic journey to Saturn in 1997. Since then it has worked hard to become one of the most successful space missions ever.

Cassini has discovered several new moons around Saturn, revealed the age of the planet’s hauntingly beautiful rings, dropped a probe onto it’s most mysterious moon, Titan, and much more.

After almost 20 years, Cassini is now on its final tour of Saturn before it runs out of fuel. When this happens (in September this year), the spacecraft will be steered into the planet, where it will burn up like a shooting star.

Until then, messages from Cassini will travel 1600 million kilometers through space to reach Earth, passing the orbits of Jupiter and Mars on the way.

The first signals sent by Cassini, early this year, will pass through Saturn’s icy rings before reaching Earth. They will collect information on the way about what the rings are made of, and their shape. Later in the year, signals will be bounced off Saturn before travelling to Earth, like an echo.

These signals will carry data about Saturn’s atmosphere and rings, that will bring us closer to understanding the planet’s past.

For a long time we didn’t know whether Saturn’s rings formed during the birth of the Solar System or during the time of the dinosaurs, when an ice moon was torn apart by the planets gravity. Cassini confirmed that they are very, very old. They formed 4.5 billion years ago, along with the Sun and planets.

Galactic Duo Enjoy their Moment in the Spotlight

The Search for our Cosmic Origins Begins

A sharper “listening” of the Universe