Searching for Star-making Materials in Our Dusty Old Universe
July 22, 2017 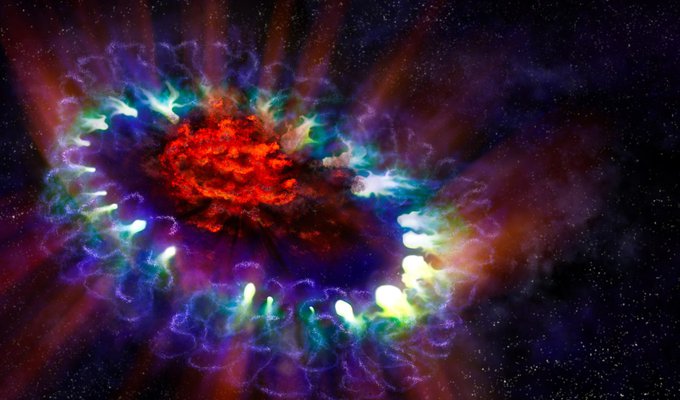 The Universe is billions of years old. Like many old things, it’s covered in dust.

But the dust in space is very different from the stuff you might find in your house. Cosmic dust is made of tiny particles, much smaller than the width of a human hair, floating around in the space between stars.

Astronomers used to consider cosmic dust a nuisance. It blocks the light from objects in space, making the Universe appear very dark and hiding lots of interesting things.

But every dusty cloud has a silver lining. When astronomers started to use special cameras to look at space in infrared, they discovered that they could see the dust shining.

This is lucky for us because there are several very important reasons to study it. Dust is the material that makes up humans, rocky planets and other stars!

Cosmic dust is made around stars, along with other material called molecules (particles that contain two or more elements).

Unfortunately, some stars end their lives in a particularly violent fashion – an explosion bright enough to outshine billions of stars. When this happens, all the dusty molecules within the star are destroyed.

Which is why scientists were so surprised recently, when they discovered tiny little dust grains and molecules inside the remains of an exploded star!

The star they were exploring exploded 30 years ago. Over time the remains have cooled down enough that new molecules are able to form from out of the many materials created in the star. The result is a kind of rich, dust factory.

This is good news for us, because like a phoenix rising from the ashes, the dead star has helped to create new stars, planets and maybe life forms!

Half of all light in the Universe is hidden from human eyes by space dust! Luckily we have created special cameras and telescopes that are able to reveal this hidden light.

A Monster in the Middle