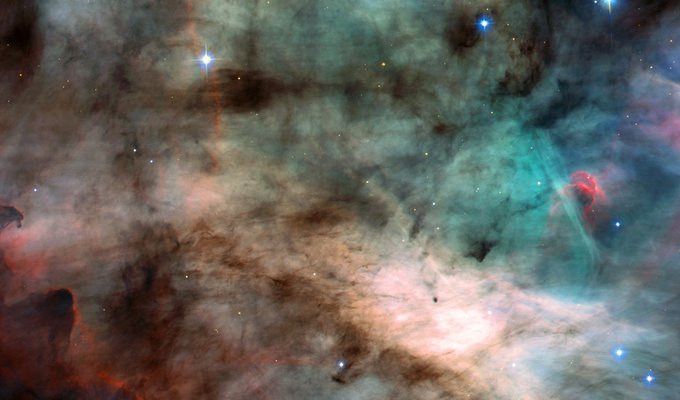 When baking a cake, ingredients like flour and sugar are crucial for a delicious treat. Likewise, in space, dust is one of the crucial ingredients for making stars!

Unlike another key ingredient, gas particles, the dust isn’t used as fuel to power the stars, but without it they would never be born. That’s because stars can only form when the material in the star-forming region is dense enough. This is where the dust grains help out – adding some extra bulk.

To better understand these regions of gas and dust where stars are born, astronomers in Japan have captured new, detailed maps of three nearby gas clouds where large stars are being created, including one called M17 which is imaged above. This is called the Star Formation Project, and it will help us improve our understanding of how stars are formed.

Sometimes telescopes can help us see what our eyes cannot. There are many galaxies throughout the cosmos that are hiding behind thick dust clouds, which usually block them from our view. To make these maps, special observations were taken of a type of invisible light called radio waves. These waves have the special ability to pass through dense gas and travel to our telescopes, even when visible light is blocked. This makes radio telescopes the perfect instruments for rooting out these regions of dust and gas.

The region shown in this picture – a region called M17 made of gas and dust where stars are formed – is about 3500 times wider than our entire Solar System!