A hidden map of the invisible magnetic Universe
May 12, 2021 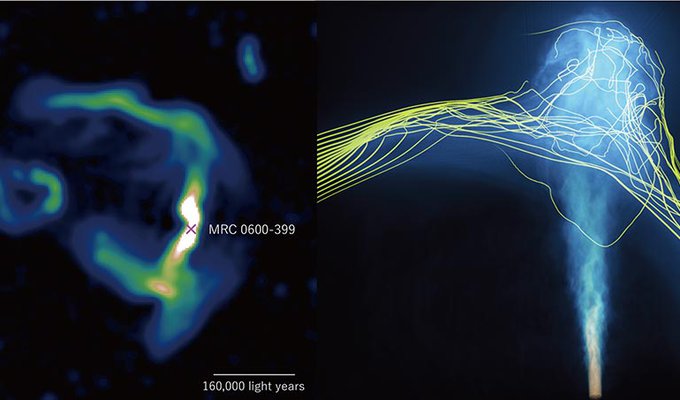 Astronomers have found a new way for studying groups of galaxies. This new technique can open windows to new information about galaxy clusters that we didn’t know before.

Remember those jets of high-energy particles that a black hole “spits” from the center of a galaxy? Well, they reveal a “map” of the invisible magnetic fields between groups of galaxies. This is especially true for jets coming out of a massive black hole in the brightest galaxy in a given cluster.

Galaxy clusters are basically made of dark matter (which can only be “seen” with light passing near it, for example) and hot plasma (a gas so hot that atoms “crumble” apart!).

As clusters of galaxies slam into each other and the surrounding matter, they create bow shocks, causing movement of the plasma around these clusters. This movement interacts with the hidden magnetic fields creating “magnetic walls” around the galaxies inside these clusters. These “walls” are very hard to detect, and, until now, astronomers had to wait for something to interact with them so they could make indirect observations of these magnetic walls.

As these interactions are really hard to see, understanding these magnetic fields is a tough call. But now, with the maps handed by high-energy jets coming out of black holes, the task can be a little easier.

A team of astronomers working with the MeerKAT radio telescope in the Karoo desert in South Africa observed a bright galaxy, MRC 0600-399, inside the cluster Abell 3376 (located more than 600 million light-years away from us!).

They saw its central black hole “spat” jets in a very unusual way: in the horizontal, as if it were laying down. These jets hit the magnetic wall around it just like a stream of water coming from a hose hitting a glass window.

This very visible and interesting interaction is giving scientists clues of how magnetic fields between galaxies in a cluster behave. Isn’t that amazing?

At the left, the image shows the jets emitted from MRC 0600-399 as observed by the MeerKAT radio telescope. At the right, we see a simulation on the supercomputer ATERUI II reproducing the phenomenon

The slamming of plasma that creates magnetic walls is called “bow shocks” in astronomy. The effect is similar to the curved ridge of water we can see in front of a fast-moving boat as it glides forward on the ocean, for example (these are “bow waves”). Bow shocks happen everywhere in the Universe, not only close to galaxy clusters. When fast-moving solar wind slams into our Earth’s magnetosphere, for example, it creates bow shocks.