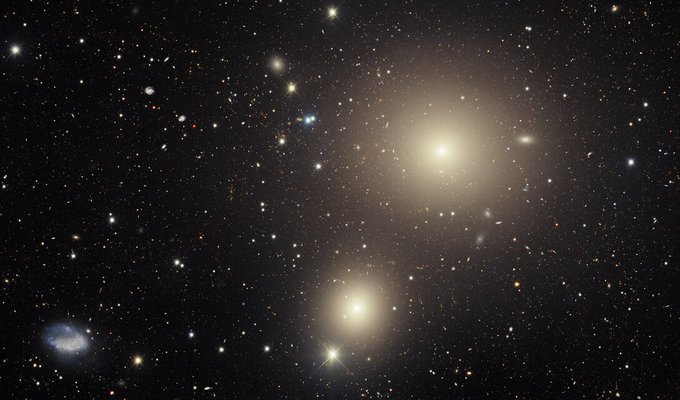 Do you see the blurred patch of light at the bottom left corner in the image above? That’s NGC 1427A, an irregular galaxy. Right now, it is moving at an incredible speed of 2.2 million kilometers (or 1.3 million miles) per hour.

In the future, NGC 1427A will clash headlong with the two bright galaxies in the center of the image, NGC 1399 and NGC 1404. These two elliptical galaxies belong to the Fornax (the Furnace) cluster, a relatively “close” galaxy cluster from us: it's only about 60 million light-years from Earth.

NGC 1399 and NGC 1404 are among the brightest galaxies of the Fornax cluster and they are getting closer and closer because of the force of gravity. As they get closer, gravity becomes even stronger, “sucking” gas from NGC 1404, the lower elliptical galaxy in the image.

All these galaxies look small in the picture, but don’t get fooled: each of them houses billions of stars!

This beautiful picture was taken using the Dark Energy Camera (DECam), one of the highest-performance, wide-field imagers in the world. It has 570-megapixels (an average phone camera has 10) and is part of the Dark Energy Survey. Among its many feats, DECam has helped astronomers discover nearly 300 previously unknown dwarf galaxies in the Fornax Cluster!

DECam is one of what astronomers call “survey instruments”, and it is used to capture images of large patches of the night sky, helping researchers to understand structures in the Universe at large scales. Survey instruments help find interesting objects in the sky that later on will be studied in detail with telescopes.