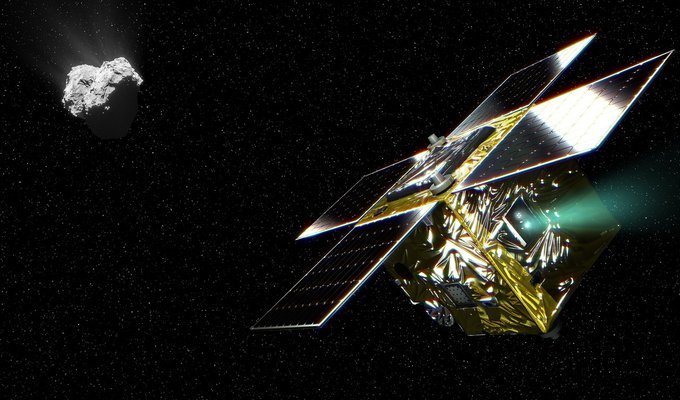 We’ve all heard it, and probably said it more than once: It’s not rocket science!

But, sometimes it is rocket science, or science about other spacecraft. These areas of science are notoriously difficult to get right and are very risky, but they provide huge rewards.

In 2014, a tiny spacecraft called PROCYON was launched into space. PROCYON (pronounced ‘pro-SIGH-on’) was designed to fly past and study an asteroid, but became lost in space when one of its thrusters failed. Since then, PROCYON has been putting itself to work studying the Sun, instead.

In September 2015, the Rosetta spacecraft was flying alongside the comet 67P/Churyumov-Gerasimenko. It was the last few weeks of Rosetta’s mission and they were flying close to the Sun.

Comets are commonly known as ‘dirty snowballs’ because they are made largely of ice and cosmic dust. When they travel too close to the Sun, some of their ices evaporate because of the heat. This creates the striking ‘tail’ we often see. It also creates a foggy cloud around the comet called a ‘coma’.

Rosetta spent it’s last few weeks engulfed inside the coma, too close to the centre to see the shape and size of the coma changing. Unfortunately, when the comet passed by the Earth the observing conditions were bad, so telescopes on the ground couldn’t get a clear view of the coma either.

Luckily, PROCYON came to the rescue, providing observations of the comet’s coma from space. The results told us what the comet is made of and how much water it’s losing in the heat of the Sun.

It’s long been thought that water might first have been brought to Earth, many millions of years ago, by impacting comets. Studying Comet 67P may help us figure out whether this is true.

PROCYON is called a micro satellite due to its tiny size – it’s slightly larger than a microwave and weighs as much as a washing machine. This is the first scientific discovery made in deep space by such a small, cheap satellite.