Science is like a Universal language, as everything in the Universe works in exactly the same way. The science that we experience on Earth is the same as the science that makes stars shine and planets travel around the Sun!

Take sunsets, for example. On Earth, we often see beautiful displays of red, orange and pink in the sky when the sun sets. This is because when the Sun is low in the sky its light bounces off more dust in the atmosphere and is scattered in different directions.

Light is made up of all of the colours of the rainbow, but the colours scatter differently. Dust scatters blue light more than red light. This means that the blue light is scattered away, leaving a beautiful red sky at sunset.

The same thing happens in space. Dusty regions of space absorb and scatter blue light more than red. In some very dusty parts of the Universe, such as star-forming clouds, this effect is so strong that none of the colours of light reach us on Earth.

But astronomers are clever: They use special telescopes that can see a different type of light that doesn’t get scattered or absorbed by big dust particles: infra-red light. (Our eyes can’t see infrared light, but we use it at home to switch on the TV with a remote control.)

The picture shown above shows the star-forming cloud called the Carina Nebula. This new photo was taken with a telescope called the Very Large Telescope. It has shown astronomers many objects that they hadn’t previously discovered in the cloud.

The  scientist Isaac Newton was the first person to realise that the laws of science on Earth are the same as the laws that govern objects in the Universe. 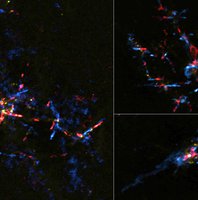