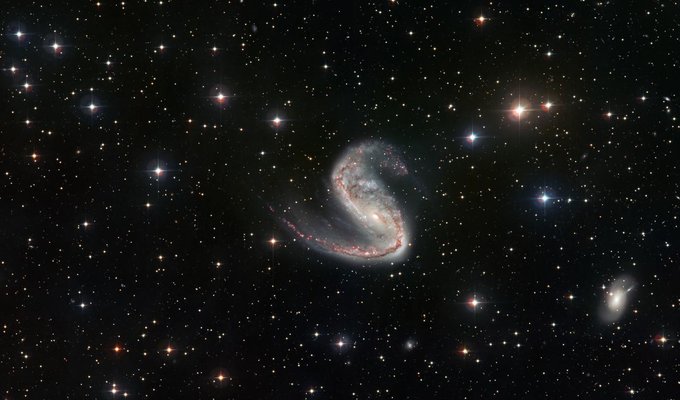 The Universe is filled with many galaxies that have perfectly uniform shapes. But the uneven S-shape of the galaxy in this new picture is messy, like a graffiti artist has drawn it by hand!

How did the spiral galaxy end up with this weird shape? Astronomers think that a long time ago, another galaxy tugged at its spiral arms unevenly, making one arm longer than the other. The longer arm looks like a hook that is used to hang meat, so astronomers have given it a funny nickname: the Meathook Galaxy.

The dazzling stars that are sprinkled around the galaxy make this picture eye-catching. But these stars don’t belong to the Meathook Galaxy – they are only in the picture because we don’t have a clear view when we look out into space. We live in a galaxy called the Milky Way, alongside billions of stars. So when we look at distant objects in the Universe, some of these nearby Milky Way stars just get in the way!

This new picture was taken recently using a telescope on Earth that is more than 2 metres wide. The telescope is in a desert, far away from city lights, in a country called Chile in South America.