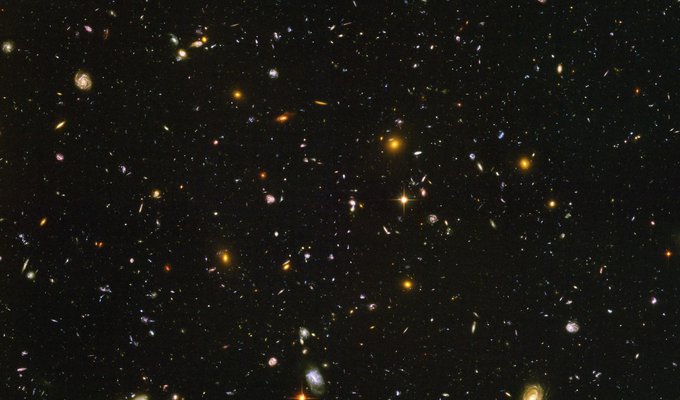 Have you ever walked down the street late a night and seen a point of light in the distance? At first it can be difficult to judge whether the light is from a car, a bike or even just a person with a torch. This is because things look fainter when they're farther away. So, while a car's headlights are much brighter than a small torch, if they car is farther away than the torch the two can appear to have the same brightness.

For the same reason, bright galaxies in the very distant Universe can be almost impossible to see when we take snapshot pictures. But by pointing a telescope up at the night sky and leaving the shutter open for a long time we can collect more light and see fainter objects.

That’s what astronomers did in 1995 when the Hubble Space Telescope was pointed at a region of the night sky about the size a tennis ball would look if it were a 100-metres away. They thought they were looking at a totally empty bit of sky but after staring at this tiny patch of the Universe non-stop for 35-hours, the telescopes revealed something amazing.

The picture contained thousands of gigantic, star-filled galaxies in just this one small section of space! This spectacular result completely transformed our understanding of the contents of the Universe.

But the image didn’t hold all the answers. To find out more about these newfound galaxies, astronomers wanted to look carefully at each one with other type of camera. One camera, called MUSE, was used to take a fresh look at the patch of sky.

For astronomers working with Muse, it was like fishing in deep water and with each new catch came excitement discussions about the species of galaxy they were finding. The new observations lasted 27-hours and revealed lots of new information. Astronomers were able to work out the distance, motion and which chemicals hundreds of distant galaxies had in them.

More than 25 new galaxies were discovered in the MUSE image that hadn’t been seen by Hubble. Many of them are galaxies that existed about 13 billion years ago! A billion is one with nine zeros! 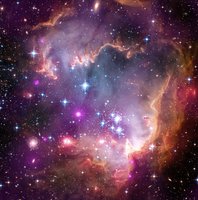