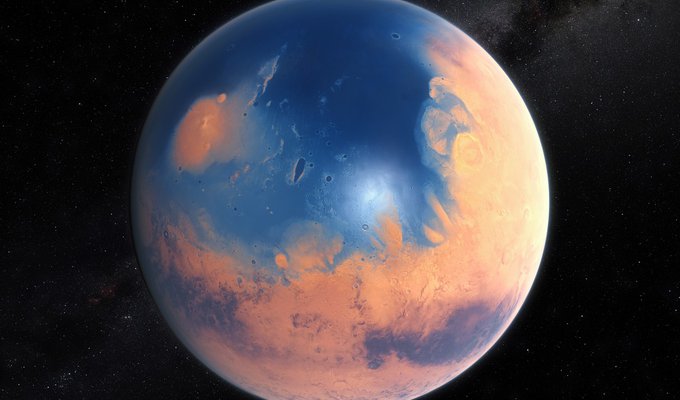 Billions of years ago the surface of Mars looked very different than it does today. Where there is now only a dry red desert, there was once an vast ocean that covered about 20% the planet's surface. That means it covered more of the surface of Mars than the Atlantic Ocean covers on Earth!

The water from this giant ocean would have been enough to cover the entire surface of the planet with a layer of water over 100 metres deep!

This information comes from a new study of Mars' atmosphere. Scientists were looking at the amount of two different types of water.

One is normal water, the type we drink and bathe in. The other contains a special type of hydrogen, called deuterium (dyu-TEER-ium). This hydrogen creates a type of water that’s slightly heavier than normal water.

This is important because it means that the sun's rays cause normal, 'lighter' water to evaporate (turn into steam) and float away into space more quickly than the other type of water.

So, by looking at how much heavy water is in Mars' atmosphere in comparison to the lighter kind, we can tell how much normal water the planet has lost into space.

It's possible that Mars once had even more water hiding below the surface. And some of it might still be there today!