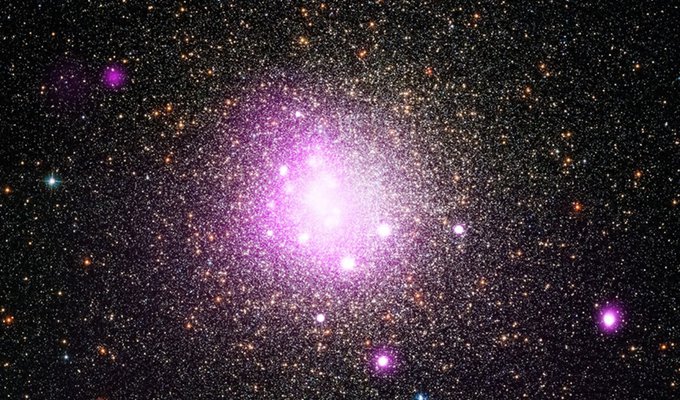 If you’re a fan of science fiction, you’ll have seen some pretty crazy things, up to time travel and the destruction of entire planets! We saw poor Spock’s home planet Vulcan destroyed in Star Trek, and in Star Wars Princess Leia’s home planet of Alderaan was blown to smithereens.

But does the destruction of planets really happen in the Universe, or is this just science fiction?

When a star like our Sun runs out of fuel to burn, its outer layers drift away into space, leaving just the very centre. For this star, and the Sun, that will be a ball about the size of Earth (over a million times smaller), which is hot, dense and really bright. This is called a white dwarf star.

It was a white dwarf star like this, deep inside the cluster of stars in this picture, that ripped apart the planet. But how could such a teeny tiny star be responsible for such a violent act? The answer is gravity.

Although we call them white dwarfs, these stars aren’t always white, they can also have orange, red or even blue tinges!