Astronomers in Japan studied data that the Atacama Large Millimeter/submillimeter Array (ALMA) collected on a twin star system, XZ Tauri, for over three years (2015, 2016 and 2017). And with that volume of data, they have produced the first-ever “ALMA Animation” of twin stars circling each other.

This “astronomical ballet” can give us better clues on how binary star systems are born and on how planets form around them.

To Takanori Ichikawa, first author of the new research, animations using radio astronomy data are an exciting new way of doing science. “I hope that this method will help to clarify various astronomical phenomena in the future,” he says.

In their “young age,” binary systems are surrounded by a large disk of molecular gas and dust  — known as the protoplanetary disk — and such a disk is exactly the place where planets form. Scientists have found many planets around binary stars, but how these dust disks form and how planets emerge from these systems is still a mystery.

Astronomers have two main ideas of how binary systems form. One is the possibility that a single, large gas disk breaks up into smaller disks, and the other is that molecular clouds get “shaken” by a violent turbulence and get broken up.

In binary systems, the position of dust disks around each star can tell important stories. They have different meanings depending on how tilted they are or how they move around each other. Because of the way the XZ Tau system is inclined, scientists believe it was formed by the breaking up of molecular clouds. But there is a lot more to know!

The Sun is a single star, but the Universe is full of binary stars, which are two stars orbiting each other. 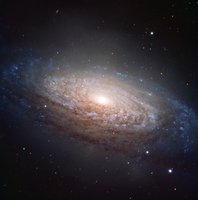 The A-Team is International