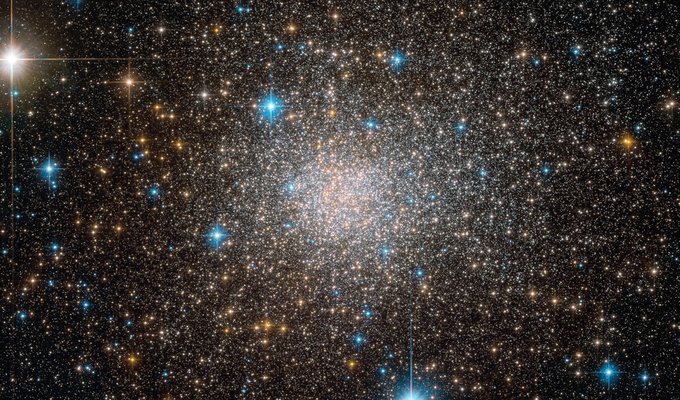 Scientists don’t always get things right first time, particularly when working with fossils. For example, paleontologists (dinosaur scientists) have made a whole host of hilarious blunders.

They couldn’t imagine a giant lizard like the Stegosaurus could have such a tiny bird-sized brain. So they decided a second brain must be hidden in it’s bum! (FYI: This turned out to be very totally untrue.)

Astronomers also deal with fossils, and these are much, much older than dinosaur skeletons, and equally challenging to study.

Around 40 years ago, the cluster of stars in this space photograph (called Terzan 5) was discovered. There are two known types of star cluster: open clusters and globular clusters. Astronomers decided that this was a globular cluster, which contains tens of thousands of ancient stars that all formed around the same time, from the same material.

However, it turns out that this is a cluster like no other! Because all the stars in open and globular clusters form at the same time, they are all the same age. But this cluster contains two groups of stars that are unmistakably different – with an age-gap of roughly 7 billion years!

For a second group of stars to form, Terzan 5 must have started life as an enormous cloud of star-making material – enough to make at least 100 million Suns!

Its unusual properties make Terzan 5 a living fossil from the early days of the Milky Way. Most scientists believe that galaxies form when enormous clumps of gas merge together. And this fossil of the early Milky Way seems to suggest this theory is right!

This Space Scoop is based on Press Releases from ESO , Hubble Space Telescope .